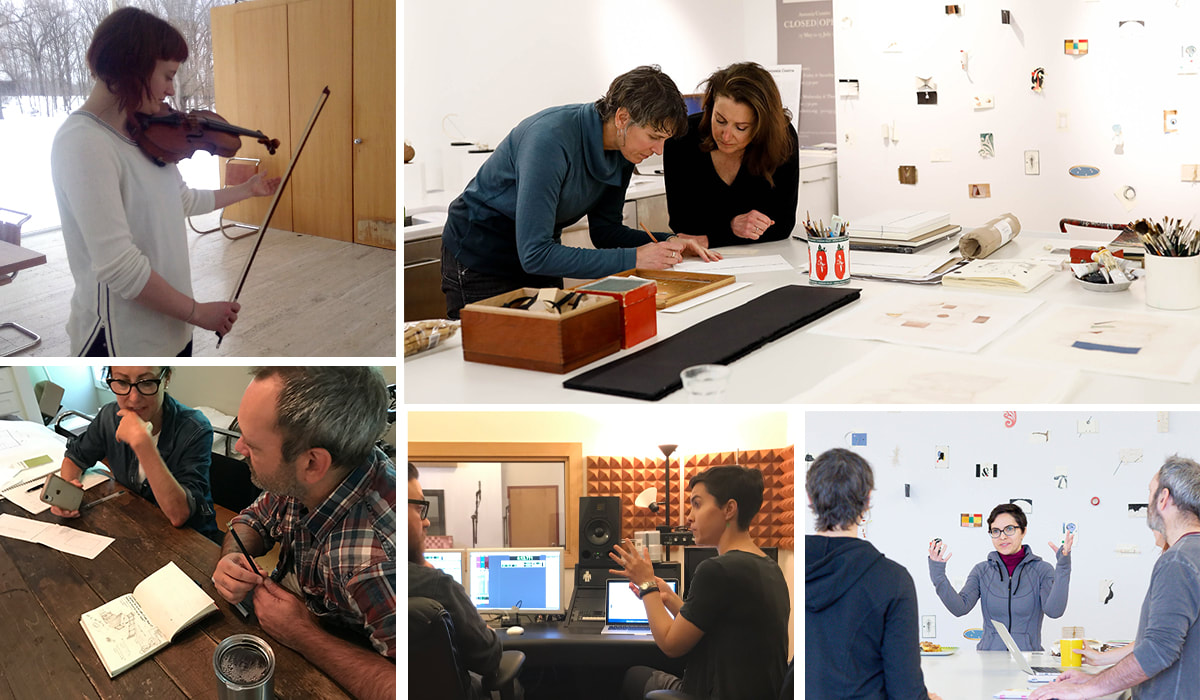 Theorem began in 2017, when visual artist Antonia Contro and poet Elizabeth Bradfield decided to collaborate. Together, they created a visual, tactile, and lyric experience in book form.

In 2019, Candor Arts published a fine art edition of Theorem that is held by Harvard University, the Menil Collection, and elsewhere. ​In 2020, Poetry Northwest Editions published a trade edition.

"a radiant example of how we do not go to art for information or even knowledge, but to rock back on our heels before something fully itself, something real and full of wonder, despite its careful elisions of detail."
—Hannah VanderHart, EcoTheo Review​, November 2020

Now the Theorem Collective is working to bring this unique expression into a performative space with violin, recordings, and animation in a designed environment.

Elizabeth Bradfield is the author of Once Removed, Approaching Ice, Interpretive Work and Toward Antarctica. Her work has been published in The New Yorker, Kenyon Review, Poetry, The Atlantic Monthly, and she is the recipient of the Audre Lorde Prize, a Stegner Fellowship, and other honors.  Editor-in-chief of Broadsided Press, she works as a naturalist/guide and teaches creative writing at Brandeis University. ebradfield.com

The music of composer Eliza Brown, described as “delicate, haunting, [and] introspective” by Symphony Magazine, has been performed around the world by leading new music ensembles, including Ensemble Dal Niente, International Contemporary Ensemble, Spektral Quartet, Quince Contemporary Vocal Ensemble, and ensemble rechêrche. Eliza’s work is frequently intertextual, interdisciplinary, and marked by collaborations that distribute creative agency and authorship. She is currently Assistant Professor of Music at DePauw University. elizabrown.net

Antonia Contro is a visual artist whose work ranges from discrete objects to site-specific installations and collaborative projects that engage artists and practitioners from a variety of disciplines. Exhibitions include Tempus Fugit at the American Philosophical Society Museum; Ex Libris at Chicago Cultural Center; Field Guide at Notebaert Museum; Closed/Open at Chicago's Newberry Library; and Descry at the Museum of Contemporary Photography. Her work is in the Art Institute of Chicago, Hammer Museum, Harvard Art Museums, Menil Collection, Museum of Contemporary Art, and others. antoniacontro.com

Violinist Clara Lyon has performed at such venues as the Kennedy Center, the Library of Congress, and Carnegie Hall. She is a prize-winner of the International Irving M. Klein Competition, the Schadt International Violin Competition, and the Prix de Musique de Chambre of the Conservatoire Américain de Fontainebleau. She is currently a violinist with the two-time GRAMMY-nominated Spektral Quartet, also named 2017 Chicagoans of the Year by the Chicago Tribune. Ms. Lyon teaches violin and chamber music at the University of Chicago and serves on the board of the Recording Academy.

Joseph E. Merideth is an animator and educator who has been a fixture in Chicago’s animation community for 25 years.  He has worked as a story artist and character animator for commercials, television, video games, and feature films including Boxtrolls, and upcoming Netflix projects Green Eggs and Ham and Klaus.  Joseph’s animated short, Stubble Trouble, was nominated for BEST ANIMATED SHORT at the 74th Annual Academy Awards .   He has also collaborated on several video and installation projects with other Chicago based artists including Field Guide with Antonia Contro for the Peggy Notebaert Nature Museum.